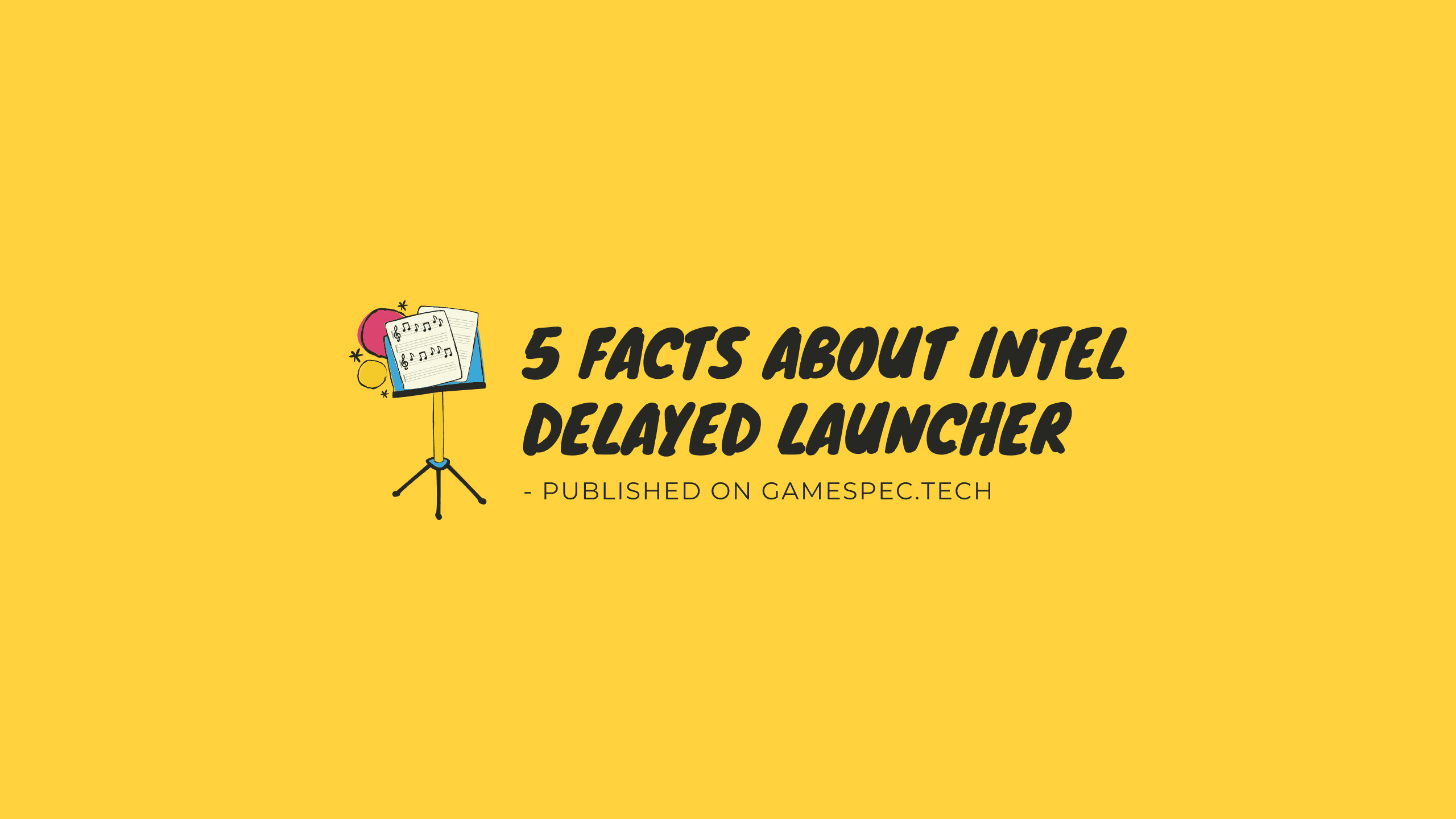 Intel delayed launcher on your PC is an interesting feature. Many people try to disable the delayed launcher mainly because it reduces the booting speed of a computer. No one likes to wait for long until their PC startup.

The race of computer’s booting time has always been a popular topic among the users. PC booting time is reciprocal to the number of applications that begin with your computer startup.

However, all applications that launch at startup doesn’t impact the bootup speed of the computer. These startup programs reasonably add few extra seconds along with the OS boot process.

Some of these applications have a low impact while other has a higher impact on the startup process. High impact apps & services tend to take more time of the booting process and the delayed launcher is one of such processes that increase around 30 to 60 seconds of booting time .

Startup time also depends on the system drive’s data transmission capacity. The introduction of Solid State Drive (SSD) to the computers bought a drastic improvement in booting time, however, many users still count on every single second.

In this post, you will particularly read about Intel Delayed Launcher, it’s advantages and disadvantages and how to disable it from your computer.

What is Intel delayed launcher?

The Intel delayed launcher is a startup application that is a part of Intel’s Rapid Recovery Technology. It is a system recovery precaution that allows you to look after the system files before they were accessed by malware/viruses during startup.

Depending on hardware speed and other processes initiating at the same time this time label can vary.

How Delayed Launcher and Intel Rapid Storage Technology is Connected?

Intel Rapid Storage Technology is designed to deliver faster data transmission speed on your drive as well as faster launching of applications.

This technology is applicable to both scenarios whether you have a single SATA driver or multiple RAID storage.

To provide data safety from virus attack or any possible error during application launching time, Intel® Rapid Recovery Technology (RRT) which is a part of Intel’s Rapid Storage Technology has the ability to restore the hard disk from “recovery partition”.

To execute these error checking and recovery process OS startup has to be delayed for a couple of seconds.

What does the delayed launcher do?

As we know the delayed launcher is a system recovery measure designed to protects your computer from virus/malware’s attack during OS booting.

If your system encountered any such attack from the virus during the startup process and thus lost some major files you may experience systems failure. Having the delayed launcher enabled can save you from such trouble.

The inclusion of the delayed launcher in Intel Rapid Storage Technology may consume a few seconds during startup however it protects your PC from being attacked and losing precious files.

Honestly, it’s a good feature of the faster data transfer technology with safety measures on.

Why do people want to disable the intel delayed launcher?

The main purpose of Intel delayed launcher is to protect your pc from data loss and providing safety from viruses and malware during the start-up process. People like to experience a fast booting of computers. Since they find the booting process slower because of the delayed launcher, people often look for removing the delayed launcher.

Although, uninstalling this service doesn’t improve the SSD or hard-drive transmission speed greatly. Intel Rapid Storage Technology is beneficial to users of a single drive too. Through the Advanced Host Controller Interface (AHCI), storage performance improves. Additionally, AHCI delivers a longer battery life with Link Power Management, which can lessen the power consumption of chipsets and Serial ATA hard drive.

Google trend data also says people are keen on finding the solution of disabling the delayed launcher startup process and the interest seems to grow rapidly in recent years.

Now the real question is;

Can I remove delayed launcher from startup?

The short answer is, yes. You CAN remove delayed launcher from your operating system.

Even you can Uninstall Rapid Storage Technology from your computer. Removing the Intel® Rapid Storage technology means the removal of Intel Delayed Launcher as well.

Another reason, if you do not have any RAID installed on your system there is no reason to keep the delayed launcher.

After a couple of trials on both conditions, Delayed Launcher (enabled & disabled), doesn’t seem to make any difference in terms of performance.

However, you should remember, implementation of this technology is for system file protection, rather than any impacts on boot time performance.

How to Disable Intel Delayed launcher?

It’s recommended to keep the delay launcher service enabled because it was developed to protect your computer and has been getting updated frequently. In case you still want to disable this feature follow the steps mentioned below.

If your system has Windows 7 OS then apply this process instead;

How to disable delayed launcher on Windows 7

After completing these steps you should be able to find a faster booting experience when you restart your computer.

How to remove delayed launcher from your pc?

If you want to completely wipe out this feature including the Intel Rapid Storage Technology, you will need to migrate from RST RAID to SATA on BIOS.

Next, you will need to uninstall the RST drivers under ‘Device manager >> Disk Drivers >> Select uninstall device.

Check this image below:

The delayed launcher is a key feature and designed to help your PC. Consider keeping it active on your computer. It’s true that you will sacrifice a few seconds of booting time however disabling it can cause more harm than good.

I hope you enjoyed this post and definitely bought something informative to you. Till the next post on this blog stay tuned.

Complete guide to remove elara app from your PC

How to fix incorrect PSK provided for network SSID error

How to fix Fitbit charge 2 not syncing problem

Scan your PC with Windows defender

Gamespec is a newly created resource site that focuses on General tutorials, How-to’s, guides, regular fixes, gadget and gaming news, and more. We focus on providing easy to follow guides to the readers.